Warning: Use of undefined constant ‘64M’ - assumed '‘64M’' (this will throw an Error in a future version of PHP) in /nfs/c01/h03/mnt/44850/domains/fargohistory.com/html/wp-config.php on line 65
 change | Fargo History Project
Skip to primary content
Skip to secondary content 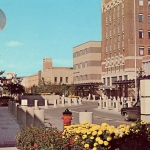 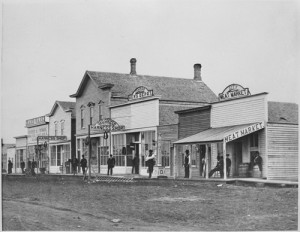 At the heart of nearly any fledgling prairie town of the latter decades of the nineteenth century in the United States lays an arterial business and commercial sector regardless of size or scope.  Without reliable establishments that provide basic services to meet the needs of an early population, growth becomes hamstrung and a town’s future uncertain. Business and commercial enterprises not only dictate the ebb and flow of a town’s economy, but also provide local denizens with access to everyday products and services for sustaining day-to-day activities that contribute to both the sustainability and growth of a prairie town capable of transforming into a city.

As a result, the physical buildings themselves underscore the importance of stable, sustainable, and accessible commercial presence to ensure the long-term viability of a burgeoning city. The architecture, buildings, planning, and development of businesses of early Fargo, North Dakota, therefore played an important role in the city’s original foundation and ascension to becoming the “Gateway to the West” on the Northern Plains with marked success well into present-day.

At the same time, Fargo’s prosperous business-driven economy and expanded growth represents seminal building, commercial, and infrastructural firsts that ultimately reflect the rapid, significant, and visible changes over time and embody the vital elements of a lasting community on often harsh and unforgiving landscape of the Northern Plains.

By following an exhibition of Fargo’s early commercial and infrastructural planning, business development, and construction photographs from 1871 to 1898, a sense of rapid change and significant growth soon emerges as a testament to Fargo’s vitality and successful growth on the Plains.  Despite instances of social, political, economic, and environmental adversity, settlers’ early vision for assertive business and commercial construction helped secure the city’s permanent place on the Northern Plains. 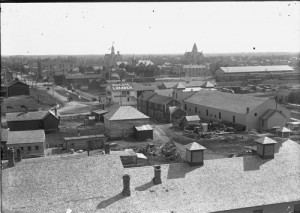 An elevated view looking southwest from the top of the Post Office shows the rooftop of Marsh & Loomis Livery building that extends the full length of the image in the foreground. The rear of the Schlanser & Sons and the Armory Hall building is visible on the right, with the two pointed cupolas. Also visible are the intersection of N.P. Avenue and 8th Street, the W.H.White Lumber Company, Dakota Business College, The Arlington Hotel, First Methodist Episcopal Church. The Cass County Courthouse, and the Fargo Central High building tower above the neighborhood in the distance. [North Dakota State University Archives, Digital ID: rs000793]

By the turn of the twentieth century, Fargo’s commercial business structures signaled a meaningful transition from the early structures. While the settlers were concerned with the immediate and practical applications, the growing city began to reflect a higher culture and advancing lifestyle on the Northern Plains. Simple utilitarian structures  gave way to the buildings that served thriving businesses at the heart of a growing city. As Fargo’s businesses continued to grow, evolve, and improve despite several setbacks, so too did the municipal amenities that ultimately cemented the city’s presence on the plains. 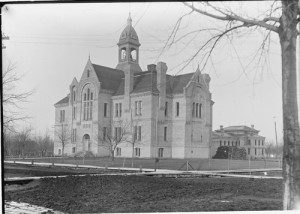 An image of the brick courthouse building is a view toward the northeast corner of the building. The jail is visible at the building’s rear. The building is three stories with a bell tower. [North Dakota State University Archives, Digital ID: rs000814]

The Cass County Courthouse, a far cry from the first courthouse building in 1877, exemplified the determination of the citizens of Fargo and the vast progress they made in less than two decades in often-harsh Northern Plains environment. Against many odds, buildings like the renovated courthouse provide additional testaments to the peoples’ determination and successful transformation of a vast prairie into a sovereign and flourishing city and county seat of eastern North Dakota.