Fargo’s first significant construction endeavor of a two-story wood-framed building brought the Headquarters Hotel, the city’s first hotel. When NPRC completed construction during the fall of 1872, the hotel housed guests, government offices, and served as the railroad station then managed by W. Hubert Smith. The hotel was located north of the NPRC tracks. 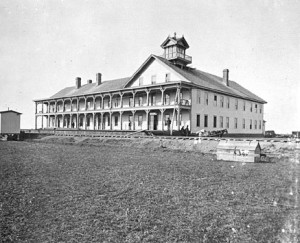 Wood frame construction was cheaper than bricks, but not as resistant to fire. On September 22, 1874, the hotel burned down, ignited by a fire in the kitchen.  Evantine Sobieski Tyler and N.K. Hubbard rebuilt, reinforced, and embellished the new  hotel, adding an entire third floor and 70 total rooms, in just 90 days. This second Headquarters Hotel was managed by W.H. Witt in 1880.

The Headquarters Hotel and its later counterparts, The Sherman House built in 1877 and The Columbia, completed in 1888 at a cost of over $100,000, became among the best and the largest in operation in Dakota Territory, rivaled only by those in St. Paul, Minneapolis, and Chicago.[1] The Headquarter Hotel’s cupola, similar to the ornamental tower of the courthouse, served as a beacon on the flat plains. It was among the first commercial structures to significantly elevate Fargo’s physical cityscape and simultaneously vault the city’s reputation as a growing community capable of sustaining a thriving commercial center. 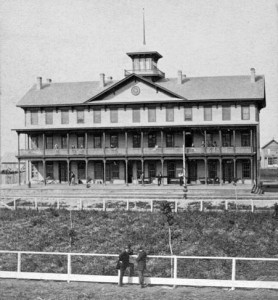 Various views of the hotel before and after its rebuilding show the railroad’s boardwalk platform in front of the hotel, allowing guests and railroad staff ease of access and convenience. Passengers had to travel only a few feet from the train to get inside the hotel.

In the foreground of the lower right image is where Front Street (Main Avenue) would go. The lower portion of the photo is where NP Park would later be located, the NP tracks, and the Headquarters Hotel; located on the northwest corner of Front (Main Ave.) and Broadway, with the Northern Pacific Railroad tracks running between the hotel and the park. 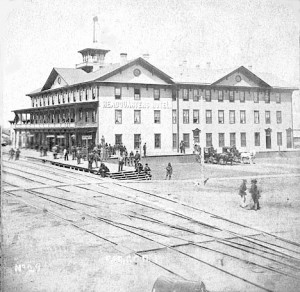 The Headquarters Hotel after Rebuild Completed in 1874