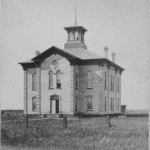 Although the Northern Pacific Railroad maintained a heavy industrial, political, and economic handle on Fargo’s early development, governmental entities were necessary for conducting official territorial business. This included the purchase or transfer of land or homestead claims as dictated by the Land Ordinance and Homestead Act as well as the establishment of commercial businesses in Fargo.  The first Cass County Courthouse, which was completed in 1877, stands as a cornerstone figure for land and business development in Fargo. The two-story brick building, replete with an ornamental tower at its peak, was constructed at a cost of  $76,000. [1]Fargo’s first courthouse embodied a unique point of interest on the prairie landscape and stood as a sign of strength and authority for the initial societal and economic outpost.  Since access to brick remained limited and costly at this time, the first courthouse in Fargo represented early and concerted efforts to push the town past the initial boom-stage of tar-paper tents and validated its future as a legitimate and galvanized county seat and gateway to the West.