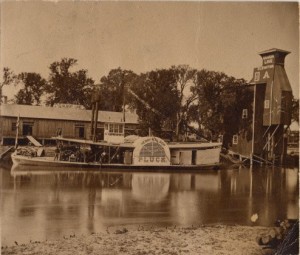 A steamboat is docked at the Alsop building on the Fargo side of the Red River. Several men are visible standing on the deck of the boat. Large lettering on the side of steamboat reads Henry W. Alsop, Pluck. On the extreme right is a Grandin Line Elevator on banks of river. The view taken from Moorhead on the eastern bank of the Red River. [North Dakota State University Archives, Digital ID: rs005367]

The Anson Northop was the first boat on the Red River, but the Alsop was among the first boats doing business on the river during the early boom days of Fargo’s infancy.  Likewise, lumberyards and granaries erected near the river or on its banks facilitated efficient transfer of goods and services arriving and departing along the Red River and accommodated around 300 railroad car loads of lumber and tons of refined grain products.