Resilience and Rebound: Virtues of Building in Brick 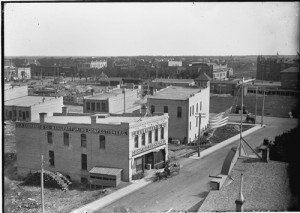 An elevated view looks southeast from the top of the Post Office building. A portion of the roof top on Marsh & Loomis Livery building is visible in the lower right corner. There is an Amercian flag flying from a pole on the rooftop. Lower Roberts Street is visible with C.A. Everhart & Co. fronting on the east side. There is a pile of wood stacked along the north side of the Everhart building, and a wagon and some bicycles are parked out front. The ext building to the south is the Fargo City Hall and Firehouse. Also visible in the scene is the rear of Key City Laundry, the ruins of the Headquarters Hotel, the Martin Hotel, and buildings along Front Street. (Main Avenue) [North Dakota State University Archives, Digital ID: rs000796]

Wood continued to provide the framework for more and more business buildings in downtown Fargo and it was not without its merits for other building or business endeavors. However, a majority of the post-fire structures shifted toward predominantly brick or stone constructions.  At the same time, technological advances allowed for increased sophistication and more architecturally sound developments for new commercial and privately-owned businesses in the area. Clearly, the people of Fargo were there to stay despite having faced the worst challenge thus far.