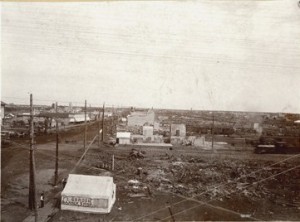 An elevated view looking north up Broadway shows ruins after the fire of June 7, 1893, which caused $3 million in damage. Visible in the image is the Northern Pacific railroad crossing at Broadway. Several boxcars are visible on the right side of the image. In the foreground is a tent belonging to Frank L. Gordon, Barber Shop. Also visible along Broadway in the distance  are a sign advertising Magill & Co, other tents and the business T. E. Yerxa. [North Dakota State University Archives, Digital ID: rs007172]

Wood construction and row developments proved accessible and resourceful for getting Fargo’s business community off the ground, but by the end of the day on June 7, 1893, fire consumed the buildings and businesses on about  160 acres in the center of the city’s thriving  prairie metropolis. As various policy holders claimed $1.7 million from insurance, the net loss on the property insured was $435,000 thousand  and the loss on holdings uninsured likely exceeded $500,000, placing total estimated losses at over $3 million.  Few central areas escaped the reaches of the fire, and the tragedy simultaneously ignited an architectural rethinking before commencing with the arduous task of rebuilding the heart of the city.[1]