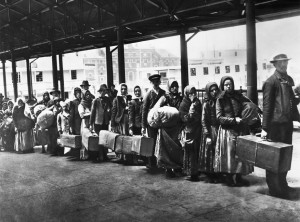 The first Jewish immigrants into Fargo were part of the middle and upper classes of Germany.  They were formally educated.  The main reason for immigrating to the United States was to escape persecution and violent attacks that their homelands ignored and in some cases encouraged.  After the town started to solidify, many unsuccessful farmers from North Dakota and Minnesota sought refuge in Fargo.  In addition to these farmers there were lesser educated Jewish immigrants from Eastern Europe that settled in Fargo.  The drastic class difference  within the Jewish population made it difficult to establish a congregation.  The original population of Jewish people in Fargo was substantial in both numbers and contributions to the city of Fargo.

The area that was set up as a “Jewish immigrant” neighborhood was near the Red River.  This area was where the kosher butcher shop as well as other shops that catered to the Jewish population set up.  There were also Hebrew schools and meeting halls to make life more comfortable for the Jewish population.[1]