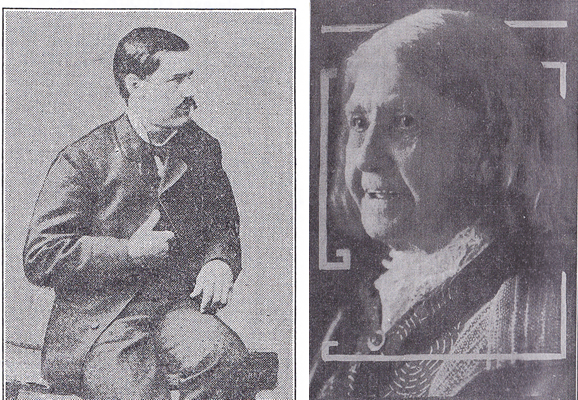 Charles A. and Matilda Roberts. Photos as ran in Fargo Forum, June 1934. Used for educational purposes.

Charles A. Roberts was a man who burned with the spirit of adventure. His family owned a meat market in Minneapolis, but butchering was not enough to satisfy Roberts. According to his obituary in the Fargo Forum, “Few men have crowded into one short lifetime more wide-flung activities, more romantic adventure, and more constructive effort than his venturesome pioneer spirit impelled him to undertake.” [1] Roberts was one of the first four men to cross the Red River and establish landholdings there in 1871. [2]  Mrs. Roberts soon joined him on the prairie, living in a tent and giving birth to their second child, Lee, the first white baby to be born in Fargo city limits. [3] Mr. Roberts soon became very prosperous, building Fargo’s first roller mill and a brick yard, which stood west of the site of present-day Fargo South High School. Roberts was also contracted to build and manage the Sanborn to Cooperstown (both in North Dakota) branch of the Northern Pacific Railroad. It was through his association with the railroad that Roberts befriended General Custer, who was stationed at Fort Lincoln, North Dakota. [4] Roberts was also one of the first men to set foot in the Black Hills during that region’s gold rush in 1877. He was also on one of the early expeditions to the Klondike gold rush in 1897.

It is certain that few citizens were more revered in the early history of Fargo than Mrs. Matilda Roberts. For evidence of this, one need only look as far as the massive seven-part serial article written for the Fargo Forum in 1930 by Ida May Owen that chronicles Mrs. Roberts’ entire life history, as though her story was itself the story of Fargo. She is widely reported to be the first white woman in the Fargo area, and the first white woman to cook a meal in that community. Upon her death in 1934, the Forum’s front page featured a generous spread that referred to her as “Grandma” Roberts, that is, the grandmother of Fargo itself.  The anonymous Forum reporter stated in melodramatic fashion: “Grandma Roberts’ story is the folklore of Fargo. Incidents in her early experiences here – humorous, tragic, dramatic, courageous, shrewd — will be story material forever for those who write and tell tales of the days when Indians roamed at will … when women, then as now, followed their husbands with only the beacon light of love to guide them over uncharted trails.” [5]