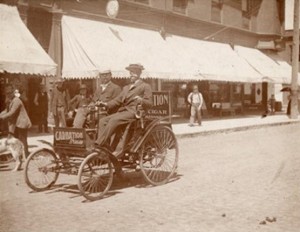 The first automobile to roll down the streets of Fargo was the Benz Velo, built by Karl Benz, co-founder of Mercedes Benz; it was the first model to have four wheels. Karl’s wife was so happy with his first three-wheeled model that, unbeknownst to him, she took it on a 120-mile round-trip promotional tour, accompanied by two sons and serving as her own mechanic.[1]