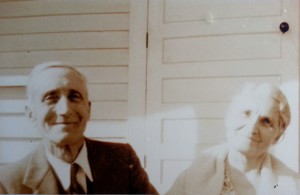 Henry and Mary Hector sitting on the porch of their home which is known as the first permanent structure in Fargo. Cass County Historical Society, 2007-028-022

In 1878, Henry Hector, just 17 years old, arrived in the Fargo-Moorhead area at the request of his brother Martin and started a grocery business.[1] He lost his store to a fire in 1882, but successfully rebuilt and continued his business.  He served as the president of the Continental Hose Company and represented the Second Ward on the city council. Henry married the sister of his brother’s wife, Mary Paulson. Henry died in 1940 at the age of 79. Today the house is known as the Hector House.[2]