Introduction to the Churches of Fargo 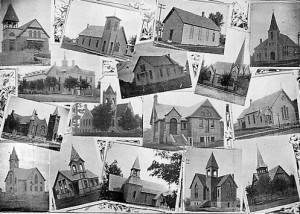 If you were to ask several Fargoans to describe what role religion has in the city today, it is safe to say that you would get a variety of answers.  When Fargo was established in 1872, the railroad began to connect the Wild West with the social and economic systems that were prevalent in the East.  To determine the religious feelings at the time and the role they played in Fargo, it is important to address several individuals and organizations that shaped the city from its very beginnings to the end of our period of study. During these 28 years, Fargo’s religious life grows significantly even from the first church service that was held down in “the timbers” and offered free whiskey to those who attended.  In 1900 we leave off with the completion of St. Mary’s Cathedral, an edifice that even non-Catholic Fargoans take pride in.  In all of this growth, Carrol Engelhardt’s argument for middle-class moral dominance is evidenced in Fargo’s religious development. Traces of this influence can be seen in nearly every social and religious organization.[1]  All in all, the clashes between different cultures and classes created a diverse religious profile that would be the foundation of future religious and social development.Brief History_01

[1] Engelhardt, Carroll L, Gateway to the Northern Plains Railroads and the Birth of Fargo and Moorhead (Minneapolis: University of Minnesota Press, 2007), 157.
Please click here to be linked to a slideshow featuring Fargo’s churches.