The Making of Bishop Shanley 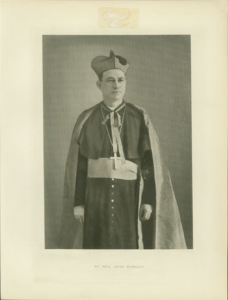 Father Shanley was ordained on May 30, 1874, at the age of only 23. Following his  ordination, Shanley arrived in St. Paul in July 1874 where he began as an assistant to Father Augustine Ravieux, Bishop Grace, and Father Ireland. In the well developed city of St. Paul, a large Catholic congregation offered Shanley many opportunities to grow in his ministerial skills.  Ireland took Shanley under his wing and gave him many responsibilities in the church.  Almost two years after he had come to St. Paul,  Shanley was appointed as pastor of the cathedral parish. During Shanley’s time in St. Paul he made it a priority to serve minorities and the destitute.[1] During the time when racial equality was decades in the future, Shanley conducted services for African-American Catholics in the basement of the cathedral and moved to have regular services held for these parishioners.

When Shanley first came to North Dakota in the late 1880s the compassion he developed for the less fortunate was exhibited by his treatment of the Native Americans.  Following the battle at Wounded Knee, relations between the Indians and settlers were quite tense. Shanley took up defense for the Indians and in 1891 sent a letter to the Fargo Argus defending those on the Turtle Mountain Reservation. In his letter, he denounced the actions taken by local agents and highlight the positive aspects of Indian culture and conduct.