From the city’s conception, Fargo officials have had to struggle with issues dealing with maintaining and funding the city streets. The wet season brought deep ruts in  the sticky North Dakota clay making travel tough and some streets inaccessible. Grading the streets of Fargo began in 1875 and paying for it fell to the citizens. Every male between 21 and 60 years old who was able to work paid with one day’s labor or its cash equivalent. Payment for grading was hard to collect while many worked off their debt, leaving the council inundated with complaints and citizens of Fargo yearning for a solution.[1] 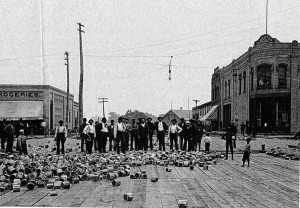 Many cities in the east began paving with small granite blocks in the mid-1860s. A decade later, brick and wood became the material of choice for paving in the smaller Midwestern towns. In the early 1880s, Fargo began to look at options for paving some of the major city streets only to be confronted with a few more years of public debates on the issue. The argument was over the use of “Phillips round cedar block” or “Stowe ordinary pine block.” Both methods used the same application, but issues with cost, maintenance, longevity, and street ownership were hot topics of discussion.[2]

In 1895 the council finally approved the cedar block method of paving. The firm of McDonnell & O’Neil was awarded the contract to pave sections of Front, Northern Pacific, and Broadway streets. Owners of the lots on these sections of streets paid just over $53,000.  The paving was successful, and the city bought a street sweeper the next year. The paving may have taken care of the mud problem, but it did nothing to stop the dust issues. When the street sweeper ran down the paved streets some called it “a menace to health” because it filled “the air . . . with dense clouds of vile dust.”[3]

Over the next several years many more of the streets in Fargo were paved with cedar block. Issues began to arise during the wet season 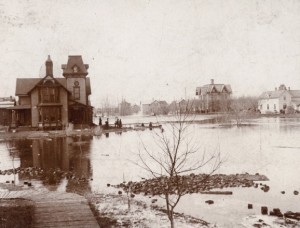 when the cedar blocks began to turn and sink, making some of the impassable. The flood of 1897 caused major problems for the city when the cedar blocks simply began to float away.  By the early 20th century, the City of Fargo began installing a concrete base under the cedar blocks to aid in the stability of the street.  At the time nothing was done to prevent the blocks from floating away. Eventually concrete became the material of choice for the streets of Fargo.[4] 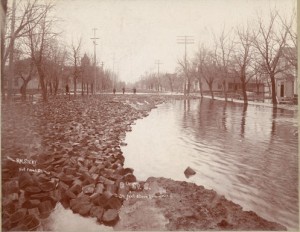 [1]   Carroll Engelhardt, Gateway to the Northern Plains: Railroads and the Birth of Fargo and Moorhead ( Minneapolis: University of Minnesota Press, 2007), 261.