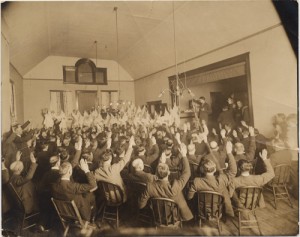 A photograph taken of a Ku Klux Klan meeting sometime in the 192?

The Ku Klux Klan began in the American South after the Civil War to defy Reconstruction efforts to allow blacks to vote and hold office. It was inactive by the early 1890s, but resurfaced in 1915 when the film Birth of a Nation was released. The film depicted the original KKK as the heroic protector of Southern honor against the horrors of minorities. As the Klan moved beyond the South, it recruited F. Halsey Ambrose, a Presbyterian minister who came to Grand Forks in 1918. He publicly espoused the merits of white Protestant Americanism and incorporated a North Dakota Klan Chapter in 1922 with headquarters in Grand Forks. The Fargo-Moorhead Chapter was incorporated the same year. They had enough robed, hooded followers that in 1922 the legislature ruled that no one over 15 could wear a mask or head covering that obscured identity. By the end of the 1920s the popularity of the Klan in North Dakota declined and the organization later disbanded.

KKK Differences in the North

Unlike the rest of the nation, the Red River Valley had very few non-white settlers during the early 20th century. The majority population was white Northern Europeans. Nationally, the Klan targeted black Americans, immigrants, Jews, and Catholics, but in this region the target were Catholics, Jews, and morally lax individuals like drug addicts and bootleggers.

Rudolph “Rudy” Bener, originally Rudwoj Bojcio, was born in 1891 in Uljanik in what is today Croatia. He moved to the United States in 1910 and filed for naturalization in 1925 in Fargo, N.D., where he worked for Ford Motor Company across from the Great Northern Rail depot. Characterized as a short man with an olive complexion and a thick Slavic accent-derogatorily, a “swarthy” man- he was not the stereotypical KKK member. He never married, but was known as “Uncle Rudy” to his friends. They discovered his KKK involvement after his death in 1964, and suspect that his membership was an attempt to prove his patriotism and to be accepted as an American.

In 1923, North Dakota passed the Anti-Klan Law, which banned the wearing of hoods or masks in front of public places. Violators faced $25-$100 in fines and/or 10-30 days in jail. The law directly targeted the KKK, but marches and “konclaves” populated by men in Klan regalia continued through 1925.