When houses of prostitution cluster in a city, they form what is commonly called a “red-light district”. “The Hollow,” as it was called in Fargo, had a scarlet glow from the 1880s to the early 20th century. Some “working girls” or prostitutes followed the men building the Northern Pacific Railroad, while others settled along the route. Many of the patrons visited Moorhead’s legal saloons, and then crossed the river to thriving brothels. On the first day of every month, Fargo’s police chief visited Malvina Massey’s Crystal Palace and the brothels of Minnie Smith, Clara Devine and others. He instructed the girls and the madams to go to the station and pay fines, usually for “vagrancy.” From July to December of 1889, the arrests brought in $2,668, or what amounted to a steep business tax on houses of ill fame. 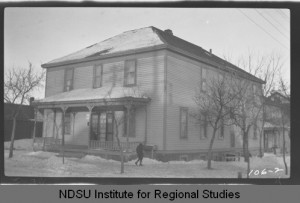 An photograph of the Crystal palace taken in 1917.

A Fargo Forum headline in May 1911 told Fargoans “Aging Negress is Dead.” Many knew of the deceased, Malvina Massey, madam of the Crystal Palace. From the late 1880s, Massey provided an eager clientele with prostitutes and illegal liquor; the latter cost her nine months in prison in 1901 and the former just a long string of $25 fines. When she returned to Fargo from serving her sentence at the North Dakota State Penitentiary, a group of friends met the train, and she was back in business. Another arrest came within months, but her case was dismissed “when the prosecuting witness forgot his lines.” Massey’s business continued at least until 1905. On her death, her estate went to her husband, H.C. Rae and a son, Henry.