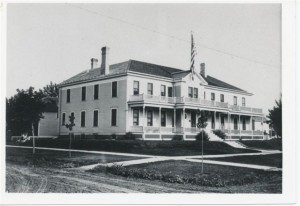 In the late 1800’s, it was the practice of the New York Children’s Aid Society to round up homeless children from the streets, and send them west on the train to be distributed to farmers. Sometimes the children ended up in good homes, in other cases they were chosen just for their ability to serve as free labor. Children’s Home Societies were created in towns along the railroad to protect the “orphan train” children from abuse and neglect and provide them with good homes.

The North Dakota Children’s Home Society was organized as a branch of the Minnesota Society by Rev. E.P. Savage, and the first Superintendent, Rev. C.J. McConnehey, arrived in Fargo in November 1891. His mandate was to “act as friend and protector to homeless, neglected and destitute children—both children arriving on the orphan trains and those from across the state of North Dakota whose families could no longer care for them.

As the only project of its kind in the Dakota territory, the original North Dakota Children’s Home Society focused on the maintenance of an active and flourishing orphanage and through the provision of foster care and adoption.¹  In 1895, Rev. McConnehey resigned his position in order to move further into the new frontier and establish the Montana Children’s Home and Aid Society. In 1897, under the new leadership of Baptist Minister B.H. Brasted, the society was officially incorporated as the North Dakota Children’s Home Society, and eventually a permanent “temporary home” was built at 804 10th Street in Fargo.

The arrival of a new Children’s Home superintendent in 1902, Frank “Daddy” Hall, initiated a period of great energy, growth, and change. According to the Grand Forks “Evening Times,” by 1907, the society had “received and provided for 740 children from all sections of the state.”²

As superintendent, Hall participated in the first White House Conference for Dependent Children in 1909, fought vigorously for the Mother’s Pension Law in 1915, and in 1923 was a member of North Dakota’s Children’s Code Commission. Through these events and other activities, Hall influenced significant legislation for the protection of children. Frank Hall led the Society for 24 years, before ill health resulted in his resignation from the position.³  The society continued its work as an orphanage and in 1957, having outgrown its facilities, moved to a new building at 1721 South University Drive, Fargo. At the same time the name was changed to Children’s Village. Due to rapid changes in our society and a decreasing need for orphanages, the board of directors voted to terminate the institutional child care program (orphanage) in 1968.  In 1972, the name of the organization was again changed–to The Village Family Service Center–the name it still goes by today.