Fraternal Organizations in Fargo and Moorhead

Like much of the nation in 1900, Fargo and Moorhead were smattered with various fraternal orders. As of 1900, both cities combined listed fifty-one fraternal organizations.[1] The Masonic Order was perhaps the most popular order established because of its celebration of Victorian principles in the life of American men. A man’s membership in a Masonic order showed his commitment to masculinity and set him up for success in business. The Ancient Free and Accepted Masons were established in Fargo as the Fargo Shiloh Lodge No. 105 in 1872, along with the Moorhead Lodge No. 126 in 1876. The Masonic order rose above all orders as it provided a prime example for the organization of other orders such as the Independent Order of Odd Fellows, Ancient Order of United Workmen, Grand Army of the Republic and the Knights of Pythias.[2] Such was the success of the Masonic order that wives of Masonic members formed their own auxiliary known as the Order of the Eastern Star. In 1893, Fargo saw its own Mecca Chapter of the Order of the Eastern Star organized and Moorhead’s auxiliary was established ten years later. In order to house the new fraternal organizations sprouting in Fargo, the Masonic Scottish Rite Order built a new temple in 1900 that provided space not only for Masonic interests but also for organizations such as the El Zagal Shrine and the Order of the Eastern Star.[3] 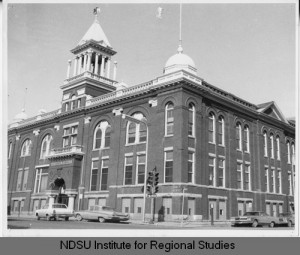 Although the Masonic order was highly sought after it did not offer one benefit that other organizations such as the Independent Order of Odd Fellows and the Ancient Order of United Workmen did. These orders offered insurance to their members that was more affordable than commercially sold insurance. With these benefits at the forefront, the Order of the Odd Fellows was established in Fargo in 1874 and Moorhead in 1879. The other insurance offering order, the Ancient Order of United Workmen, permanently established itself in Fargo in 1889 and later in Moorhead as of 1890.[4]

Another fraternal order, the Grand Army of the Republic, organized itself around veterans. It provided veterans with food, cash, and even railroad transportation. This organization developed as the John F. Reynolds Post No. 44 of Fargo in 1884. The women’s auxiliary, Woman’s Relief Corps, aided the men’s order by providing assistance and refreshments at the orders’ banquets. Both the men’s and women’s organizations also provided the community of Fargo with an annual Decoration Day observance every May 30th in which veterans were celebrated through community programs and decoration of veteran graves at local cemeteries.[5]

Not only did fraternal organizations offer the citizens of Fargo and Moorhead physical benefits such as insurance and memorial services, but it also provided citizens an outlet for communal gatherings in a growing and changing society.

[1] Carroll Engelhardt, Gateway to the Northern Plains: Railroads and the Birth of Fargo and Moorhead (Minneapolis: University of Minnesota Press, 2007), 181.