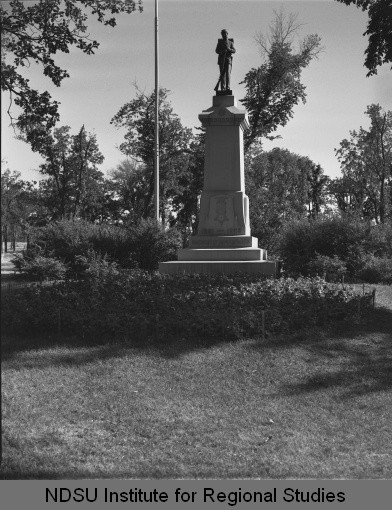 Though North Dakota was not a state when the Civil War took place, its history was shaped by the contribution of hundreds of Union Civil War veterans.[1]  Though much research needs to be done to fill out the story,[2] some basic conclusions are in order.  First, Civil War veterans came to Fargo in significant numbers in the decades after the war, just as they did to many other Midwestern and western communities during this period.  These men were the quintessential “Yankees,” men who were often the first to settle with their families in the new towns and surrounding countryside, many of them arriving with the railroad.  Frequently in setting up farms they benefitted from not only the Homestead Act, but also their ability to claim additional land based on their status as veterans.  As Caroll Engelhardt notes, Civil War veterans often emerged as community leaders, including Fargo mayors “Colonel” Wilbur F. Ball, who had served in the Ohio Cavalry, and J.A. Johnson, who served in both the Confederate and Union armies.[3]

Many veterans joined the principal Union Civil War veterans’ organization of the time, the Grand Army of the Republic (GAR). The John F. Reynolds Post No. 44 was organized on February 22, 1884, with local veteran Lafayette Hadley playing a major role.  Renumbered Post No. 5 with North Dakota statehood in 1889, it was named for Major John F. Reynolds, who died in action while commanding First Corps of the Army of the Potomac on the first day of the Battle of Gettysburg in 1863.  The post grew from its initial 64 charter members to a peak of 287 members before it began a long decline before the death of its last member, Colonel John W. Carroll, on March 3, 1942.[4]

During its lifetime, like other GAR posts, members participated in state and national encampments.[5]  They played a significant role in Decoration Day, an early version of Veterans’ or Memorial Day, in which wreaths were laid at the graves of military veterans, as well as other patriotic celebrations.[6]  The men also participated in military parades and ceremonies, notably in the send-off and reception of members of Co. B of the First North Dakota Infantry during the Spanish-American and Philippine-American Wars (1898-1899).[7]

One lasting accomplishment of the post was the creation of the GAR Monument in Island Park, Fargo, in 1916.  Constructed with funds raised by North Dakota Governor Louis B. Hanna and the Reynolds post, it was dedicated on Decoration Day 1916, and bears the inscription:

“To the Dead a Tribute, To the Living a Memory, To Posterity an Inspiration.”[8]

[1] I am leaving aside the issue of the battles against the Sioux (Dakota, Lakota, and Nakota) which took place during and after the Civil War.  There were recruits from Dakota Territory that took part in Indian War and Civil War battles as well, but they were relatively few in number and their stories have been tracked elsewhere in the historical literature. We don’t have a sense at this point of how many Confederate veterans came to the Fargo area, aside from Mayor Johnson (see below).

[2] Much of the background information from this entry come from the “Finding Aid to the Grand Army of the Republic, John F. Reynolds Post No. 5 Records,” at the Institute for Regional Studies & University Archives, North Dakota State University Libraries, at   http://library.ndsu.edu/tools/dspace/load/?file=/repository/bitstream/handle/10365/201/Mss1053.pdf?sequence=3  (last accessed 12/19/13).  At the time of writing (December 2013), the archives were in the process of being moved to a new location and were therefore temporarily inaccessible for researchers.  When the archives are re-opened, this would be the obvious place for a researcher on Civil War veterans in the region to begin.  The collections contain data about membership, meetings, and even burial plots lists for local veterans.

[3] Caroll Engelhardt, Gateway to the Northern Plains: Railroads and the Birth of Fargo and Moorhead (Minneapolis: University of Minnesota Press, 2007), Kindle Edition, locations 3243-3272.

[4] Information from the “Finding Aid to the Grand Army of the Republic, John F. Reynolds Post No. 5 Records” cited above (note [2]).

[6] Engelhardt notes that the GAR hosted their own Fourth of July picnics in Fargo’s early years (Location 1602) as well as providing Memorial or Decoration Day services (Location 2338).  The Decoration Day service for 1899, which included remembrance for the First North Dakota Infantry, then fighting in the Philippines, is covered in “Decoration Day,” Fargo Forum and Daily Republican, May 30, 1899.

[7] For the reception of Company B after the Spanish-American War/Philippine-American war and the GAR role in it, see “Home at Last!” Fargo Forum and Daily Republican, October 2, 1899.