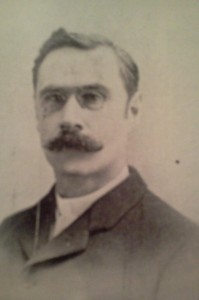 As the target for the Northern Pacific Railroad Company’s (NPRC) river crossings became clear, an enterprising business proprietor, W.H. White, secured the contract for the timber for the approaches to the NPRC bridge at Fargo in December of 1871. The timber arrived from the east by May 1872 and was used in building the bridge that spanned the Red River and connected the railroad with the town of Fargo. Large scale settlement could then ensue.[1]

Although much of Fargo’s initial lumber came directly from the nearby banks of the Red River, natural resources, like much of the timber on the Plains, were finite. White supplied additional lumber resources not only to Fargo, but also to all of the early towns on the Red River. This included shipping lumber to new points on the NPRC line and on flat boats along the intricate inland river systems.  White is also credited with the procurement and dissemination of fuel oil and for having fixed himself as the sole owner and operator of one of the oldest mercantile businesses in North Dakota.