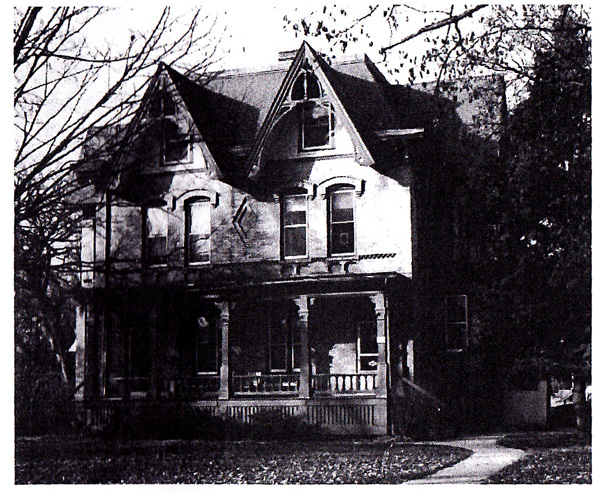 One of Fargo’s grandest old homes, the Charles Roberts House was built in 1884, anchoring the north end of the historic South Eighth Street district. It is an enormous dwelling: it features over 20 rooms and measures in at well over 7,000 square feet. It has a carriage house and a large, picturesque yard. According to architectural historian Ron Ramsey, the Roberts Home is a “truly exuberant piece of architecture, this house in High Victorian Style exhibits the use of spindles, brackets, spikey ornaments, decorative brickwork, high ceilings, and steep roofs.”[1]  Astonishingly, this home was designed not by an architect, but an untrained pioneer woman who also wore many other hats during her lifetime.  Her name was Matilda Roberts, widely regarded among locals of the time as the “most beloved women in Fargo.” [2]While her husband, Charles, was away on railroad business in 1883, Matilda Roberts decided to build a home that would demonstrate her family’s position on Fargo’s social ladder. She designed the house and superintended its construction. She and her boys installed lathing to all 20 rooms, their handiwork still buried under plaster and decades of paint. The brick of the home was taken from the Roberts family brickyard–in fact, it is the same brick that is used in Old Main at NDSU. On the main floor, Matilda designed four large rooms that could be opened into one large meeting area, the floors covered with thick Axminster carpets. The house was filled with mahogany furniture and featured eight fireplaces. According to the Fargo Forum, “The dining room was in polished golden oak. Willie’s room was in blue with a water lily motif… Lee’s red, Tan’s pink, and Matilda’s gray and rose… When Charlie came home, he was even more amazed than usual at his practical wife.” [3]

The 1890s were an exciting time in the Roberts household, for Matilda seemed determined to open her home to any and all social opportunities.  A large ballroom on the third floor was the scene of many parties. Often, Schirrman’s Orchestra would play from the balcony to gathered guests outdoors. The Roberts were generous to the students of the Agricultural College (now NDSU), for their “basement was fitted out as an amusement room, a clubhouse to the young men of the town. There was an $800 billiards table and everything else was on the same scale.” [4] Lawn parties were also very popular at the time. “Chinese lanterns strung from tree to tree, ices in a tent at a smilax trimmed table, an orchestra playing behind the shrubs. Eucre occupied the place that bridge now does and there was always a prize for high score and for lone hand. At one party, the guests had ten minutes to make a buttonhole; a gold thimble went to the best one, a silver to the worst.”  The Roberts were not involved in many social clubs.  However, Mrs. Roberts was instrumental in founding the Fargo YMCA and a ladies’ club called the Quiva Club, which met in her home. [5]