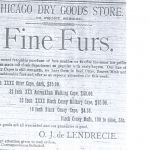 There were many department stores in Fargo. One was the Chicago Dry Goods House department store at 618 Front Street.  It later changed its name to the deLendrecie’s. It was situated right in the heart of the city and the location helped to keep it profitable in the midst of the depression in the mid 1890s. That made the store a staple of Fargo until the fire in 1894. The fire led to an influx of architects, many of whom would be cooped up in tents or hotel rooms just about anywhere to get out of the rain and cold. They had big plans for the department store.  It was re-built in 1894, with two-floors, a basement, and a mezzanine.  The property was moved to Broadway and Seventh Street, so it was closer to the Headquarters Hotel, and would help bring in steady amounts of people and keep revenue high.- Mathias Zastrow, Digital History, 2012