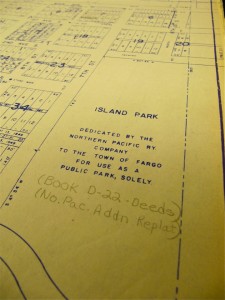 As railroads pushed out onto the Great Plains, city founders throughout the nation embraced the idea of developing public parks. In the words of Roy Rosenzweig and Elizabeth Blackmar, “By the early nineteenth century municipal and national governments had begun to establish and landscape public parks that represented the romantic ideal of rus in urbe — country in the city.” This is an inversion of the phrase urbs in horto, Latin for city in a garden (which also is a nickname for Chicago).[1] In the context of Fargo, the Northern Pacific Railroad realized the economic gains of planting cities throughout the Great Plains, and they also knew that it would be important to bring aspects of that garden back into the fold of the city.In 1881, James P. Power, an agent with the Northern Pacific Railroad Land Department, convinced the railroad to grant Fargo the public space of Island Park.[2] The map of Island Park at right reflects the contrast with the early city imposing itself on the Great Plains wilderness. The linear, grid-like organization of 7th Street and 2nd Avenue borders the west and northern portions of the park while 5th Avenue transitions into 6th Avenue by following the natural, oxbow topography around the southern edge of the park.

[1] Rosenzweig, Roy and Elizabeth Blackmar, The Park and the People: A History of Central Park (Ithaca and London: Cornell University Press, 1992), 4.

[2] Carroll Engelhardt, Gateway to the Northern Plains: Railroads and the Birth of Fargo and Moorhead (Minneapolis and London: University of Minnesota Press, 2007), 30-31.