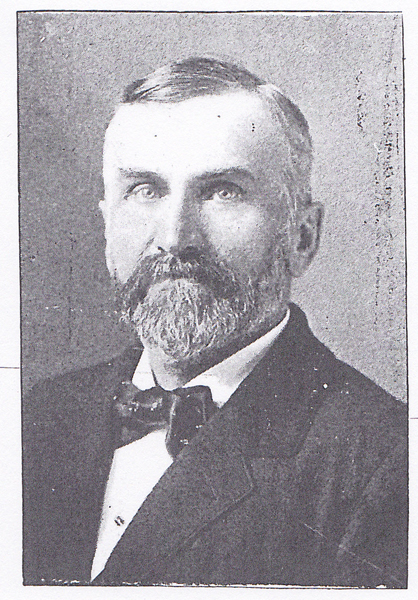 The Roberts and Haggart families were twined together through marriage and business, and both clans featured prominently in the early history of Fargo. Brooks, Maine-native Samuel G. Roberts arrived in Cass County, North Dakota in January of 1872, making him one of the earliest settlers in the area. He had fought bravely in the Civil War in the Seventeenth Massachusetts Volunteers and the Ninth US Veteran Volunteers, known as Hancock’s Corps, rising to the rank of first lieutenant and was wounded three times. After his final discharge, he settled in Minneapolis, studied law, and became admitted to the bar in 1870. He then relocated to Fargo and acquired a quarter section of land, which is now the northwest corner of Broadway and N.P. Avenue. In 1872, Samuel married Jennie Baldwin, and the Roberts family settled their claim, building their Italianate –style home there in 1880. Roberts formed a legal partnership with S.G. Comstock, serving Moorhead, making the duo the first legal office in the area. [1] However, this partnership dissolved, and Roberts built a practice across the river in Fargo, a position he held until he moved to California in the 1910’s.

Gilbert Haggart, son of Fargo’s first sheriff and fire marshal, John E. Haggart, had married Ruth Roberts, daughter of S.G. Roberts, in 1900, and the two settled in the Roberts family home. In a 1966 letter to his daughter-in-law, Mrs. John Roberts Haggart, Gilbert recalls many fond memories of living in early Fargo. “You can well imagine how nice and clean everything was kept. Every family had a hired girl. Father always had a hired man to take care of his driving horses. While my mother raised nine of us children, she always had plenty of good reliable help.” [2] Gilbert seemed fond of his mother-in-law: “Ask (John Roberts Haggart) if he does remember his grandmother, Mrs. Jennie Roberts. She thought he was a fine boy. She said when he got to be ten years old, she was going to take him and they were going to take a trip around the world. I think it was cancer she died of. She never complained. While Mrs. Roberts was alive, we had no electricity. She had some lovely brass lighting fixtures containing kerosene lamps. Mrs. Roberts cleaned the glass globes and trimmed the wicks. Every morning. Said she never expected to have a girl do more than herself.” [3]