nature with a late spring flood causing destruction throughout Cass county in North Dakota, and Clay county in Minnesota. In the winter of 1896 and 1897, large amounts of snow fell around North Dakota and Minnesota, leading there to be concerns about flooding, before the spring melt had even set in. In April 1897, only four years after a devastating fire burned down parts of Fargo, these fears came to fruition with what would be the flood of the century in the Northern Great Plains. The Red River crested at approximately 40.1 feet on April 7th, 1897.

With rising waters, the people of Fargo-Moorhead tried their best to preserve the property and save the cities from substantial damages. In an attempt to save 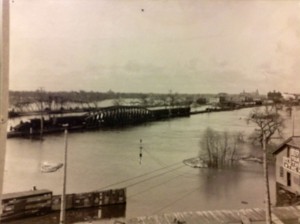 The Red River Valley, and specifically the towns of Fargo and Moorhead would not see such high waters in a flood for one hundred years, until the flood of 1997.